Q&A With the Senior VP of Communications of the NCAA, Bob Williams

Buffalo, NY – Bob Williams paid a visit to his alma mater on Friday, November 17 to share some career advice with current students.

Williams, who has been the NCAA’s senior vice president of communications since 2010, dispensed with his busy schedule to impart valuable wisdom about Buffalo State’s student body during his 1 p.m. talk in Upton Hall.

After his talk, Williams received a tour of the much-changed campus, including the newly renovated academic commons at the E.H. Butler Library. Later in the evening, Williams was inducted into the Communications Hall of Fame.

Emotions overcame Williams because he “didn’t expect such a great honor”.

However, I received the true honor for this day. After he finished speaking at 1 p.m., Williams sat down with me and agreed to a 15-minute interview. Listed below is the list of questions I asked, with Williams’ own answers following.

Q: Going back to where it all began, what did you major in at Buffalo State?

A: I think my major was mass communications and public relations. This was the name of the pioneer at the time.

Q: Did you train anywhere during your undergraduate years?

A: Yes, I trained in the Air Force. I had summer appointments, May through August, and worked at the local Air Force base near my hometown of Rome, New York. The last two years I worked in the public affairs office at the Air Force base. That gave me a real taste of connection opportunities.

Q: What are some of the skills you learned from college that made your career in communications?

A: Some of them were very basic skills. I came to college as a 17-year-old boy and left as a 21-year-old man. In essence, I learned responsibility, I learned I had to show up, I learned I had to produce. Nobody would do that for me. No one was going to make me wake up. I had to. This was one of the best lessons I learned. The college gives you independence for the first time. If you want to succeed, you cannot be afraid to work hard.

Q: After graduating from college, what is your career path?

A: After graduating from college, I was assigned to the Air Force Base as a writer. I spent about 6-8 months developing the content of the core paper. Then, in November 1979, I left for Officers Training School. I spent the next three months in San Antonio, Texas. In February, I was commissioned as a second lieutenant and began my career in the Air Force.

Q: Was your job in public affairs in the Air Force different from what you do now in sports communications?

Q: In your current role as the NCAA’s Senior Vice President of Communications, what does your daily schedule consist of?

A: I like to think it’s always different. There are always different challenges no matter what. I could wake up with a task I’d like to tackle, but by 9am something else could have happened in the sports world and shifted me elsewhere. I spend most of my time with the senior staff and the president of the NCAA. We spend a great deal of time and focus on analyzing what’s going on in college sports, what the challenges are, and developing our attitude about certain things and our response to certain things.

Q: When a crisis arises, is there a strict crisis management plan to follow?

A: At this point in my career, it’s kind of a muscle memory. However, whenever a crisis arises, there are always certain things that you must do. You always have to get someone to work on and sort out fact and fiction. Then I take this information and show it to the senior staff. Oldest decision ideas. Whenever it’s time to address the media, you should always provide a course of action or a plan for a solution. Otherwise, it will create more problems and questions.

Q: What is your favorite part of your job?

A: My favorite part of my job is what I do now. Getting out on campus, meeting students, learning where they might need help, and how we can help them. This is the coolest part of my job.

Q: What is the most challenging part of your job?

A: I would say crisis management. The NCAA tends to be in the news a lot. Sometimes we make the news, sometimes the news can be made for us. In the latter case, it can sometimes be difficult.

Q: Can you explain the importance of making connections in this area?

A: Knowing people and building a relationship with them is very important. The perfect job rarely comes where you are hired right away. As you go up the chain, it happens less and less. What often happens is word of mouth. Someone will know an organization or company that needs a VP of Communications [or another position] And they started working on their network. This is when they will call you and offer you the guarantee. Oftentimes, this is how people are hired.

Q: Does your job, or any job in communications, have a strict list of duties that you follow, or do you have to constantly adapt to meet the needs of the company?

a: [In referring to only following a list of duties] No not at all. List of assignments suggestion. It’s the bare minimum that an employer is looking for. In my experience, you always have to do more than that. Typically, when looking at a list of duties, the last line will say, “And any other duty the employer deems appropriate.” Often, these duties are the most difficult.

Q: Can you talk about NCAA postgraduate communication programs?

A: We have three or four positions available each year. One intern working in internal and external affairs. In this position, they primarily perform media relations and public relations. We usually have another intern assigned to social media. The latter is dedicated to digital and visual media.

Q: What would look great on a resume for someone trying to land a job in communications?

A: Develop a track record. Develop a record that says you are productive. This will get you noticed.

Q: What made you choose a career in communications?

Q: Obviously, in your situation, you cannot be biased towards any particular school. However, is there one sports team you’ve always cheered for behind the scenes?

Aside from his years of professional experience, Williams has shared stories about his time as a student at Buffalo State. Show your gratitude to the school for everything you have done for him.

During his talk, Williams shared several “odd lines” that I’d like to share with you. It did not fit into any one question or answer, but could instead be applied to life in general.

“Make sure you are in control of the technology and not the other way around.”

“An ounce of pull beats a lot of push.”

“Trust how you feel. If you think something is not going to go well, it probably won’t.

Williams truly embodies the excellence that the “Buffalo State” stands for. Despite many hardships and personal challenges, Williams rose above his teammates and claimed his rightful place on the communications throne.

By simply doing what he does, Williams serves as a role model and a spotlight on the Buffalo State student body.

It gives us hope, determination and fighting spirit.

On my behalf and on behalf of the entire student body at Buffalo State, thank you, Mr. Williams. 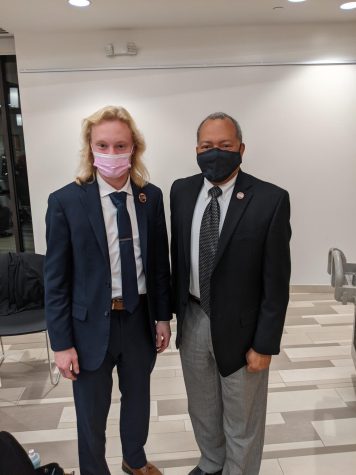