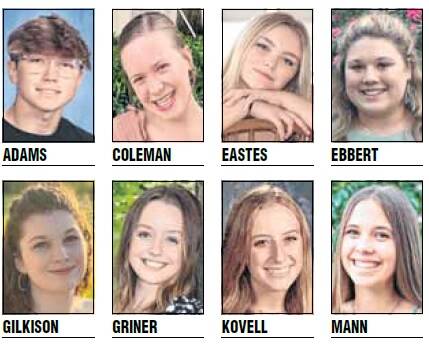 Recipients are selected in Hancock County each year as part of the program, which offers more than 140 scholarships statewide each year.

The Hancock County Community Foundation, which oversees the county’s application and selection process, has released the names of this year’s eight finalists. The winners are expected to be announced in early December.

Here are the finalists:

Garrett is the son of Mike and Estina Adams of Greenfield, who own Comet Kart Sales in Greenfield. He plans to major in Computer Science and Mechanical Engineering to be able to contribute to his family’s business, as he has worked for the past two years.

Garrett created a nonprofit charity called Garrett’s Giving Back, which benefited the gastroenterology unit at Riley Children’s Hospital. After he was diagnosed with Crohn’s disease and rheumatoid arthritis, he created the nonprofit organization to give back to the hospital, where he spent a lot of time in treatment.

Over the past six years, he has helped raise more than $50,000 through the nonprofit organization by fundraising, organizing fundraisers, and selling the pens he made with his father. He also participated in his school’s DARE drug awareness program, where he spoke to middle school students about the dangers of drug use.

Elizabeth is the daughter of Tracy Coleman and Susanna Coleman, both of Greenfield. You plan to major in mathematics and engineering education to pursue a career in teaching.

Having a passion for teaching, Elizabeth has participated for the past four years in Arrow, a program in her high school that reduces risk factors for middle school students. Last summer, she received a grant from the Greenfield-Central School Foundation to launch the Jump Start Program, which helps engage freshmen and sophomores in school activities.

She has also taught preschoolers and organized events at Mt. Comfort United Methodist Church, and prepared and served meals at the Kenneth Butler Memorial Soup Kitchen.

Olivia is the daughter of David and Katie Estes from New Palestine. She plans to major in pre-medicine, with the goal of becoming an obstetrician and gynecologist.

Much of her service work focuses on creating a community within her school and town.

As part of a service learning class, Olivia partnered with another student to create a messaging friend program that connects elementary students with local nursing home residents. As the student section leader at her school, she uses social media to promote activities, sports days and events.

Abigail is the daughter of Andrew and Chantelle Ebert of Shirley. Plan to major in occupational therapy or elementary education.

She has volunteered with Shirley’s Volunteer Fire Department since she was a child, doing a wide range of jobs from washing fire trucks to distributing food and water at fire sites. She has also volunteered with Greenfield Church of Christ-Home Church, working on missionary trips and cleaning and maintaining church building and individuals’ homes. She also helps with community events through Shirley Visionaries.

Her service work at the school includes helping to run the Eastern Hancock Peer Pals Program, which provides social interaction and academic assistance to students with special needs, and serves as a peer tutor in a core skills class.

Rachel is the daughter of Scott and Nadine Gilson of Greenfield. Planning to major in health sciences on the path to becoming a doctor. She was motivated to become a compassionate physician with her family’s extensive experience with cancer.

Much of Rachel’s service work focused on her church, where she was a regular volunteer at a child care center, served in the church’s middle school youth group and went on three mission trips. She is also a volunteer at Hancock Regional Hospital, where she has helped transport patients, work in the gift shop, and change beds and storage rooms.

Maitlyn is the daughter of Matthew and Stacey Greiner of Greenfield. Her service with DARE influenced her to pursue a career in law enforcement.

For the past four years, Maitlyn has served as the only DARE Youth Advocacy Board member from Indiana. She has spoken at DARE’s 5th grade alumni and officer training conferences, and has made numerous public service announcements to the media. I also implemented the DARE curriculum at Mt. Vernon Middle School.

Hayden is the daughter of Doug and Sarah Covell of McCorsville. She plans to become a pediatric nurse.

Its main community service is focused on the Fortville Area Resources Mission (FARM) food pantry. She also leads a 5th/6th grade class at her church, where she is active in children’s ministry. For the past five years, she has worked with the Shepherd Community Center to select and wrap Christmas gifts for children with her family. Hayden also volunteered with the Kyle Jay Foundation’s golf outing and fundraising for the Kenneth Butler Memorial Kitchen Soup.

Emma is the daughter of Jeff and Janet Mann from New Palestine. She intends to major in Special Education, having served in her high school basic skills class for several years.

When Emma was nine years old, she formed an organization called Emma’s Peace Bears in honor of her aunt who died of colon cancer. The organization donates a new bear to anyone of any age who is undergoing chemotherapy. Each bear comes with a handwritten note with words of encouragement. She has helped raise $10,000 to buy the bears, and she runs the team of volunteers who collect them with the help of Build-A-Bear. She hopes to turn this effort into a permanent nonprofit.

Emma also volunteers with the Indianapolis Children’s Choir Choir, which gives children with disabilities the opportunity to express themselves musically, as well as the Indianapolis Zoo’s Teen Program and Dragon Flyers Running Program.

Scholarships 2021 that international students can still apply for