111 Years After His Death, Dallas Acknowledges the Lynching of Allen Brooks in Downtown

On March 3, 1910, a crowd of 3,000 overwhelmed Allen Brooks, a Dallas handyman, falsely accused of raping a young girl, while awaiting trial in Dallas County Court. The mob crept into the courtroom, grabbed Brooks, tied a rope around his neck, and threw him through the second floor window of the courtroom.

Brooks fractured his skull when hitting the ground beneath him. His body was dragged to the intersection of Maine and Akard, where he was hanged by a mob from a telephone pole near the three-story Elx’s Arch. The crowd swelled to over 5,000 people from Texas, Oklahoma, and the surrounding southern communities. Not yet tried.

George Keaton Jr., executive director of Remembering Black Dallas, says Brooks’ execution was among the most extrajudicial executions recorded in the southern Jim Crow region. “On the back of a postcard, someone wrote an account of what happened that day, and that they also planned to return to take charge of an African American man who was awaiting trial,” he says.

Black Dallas, a Keton nonprofit, states, aims to “preserve and promote African-American life, history, artifacts, and culture in Dallas and surrounding cities.” He spent years pursuing an official sign of lynching, which culminated in a party and parade on Saturday afternoon. Now, 111 years later, the label is telling Brooks’ story.

In December 2018, the nonprofit approached the City of Dallas to apply for the mark through the Equal Justice Initiative’s Community Historic Label Project. Opened in 2018, the Institute for Justice and Citizenship National Peace and Justice Institute in Birmingham, LA, is a museum that chronicled the history of slavery and apartheid in America. One of the museum’s goals was to expand its mission to cities across the country, to get them to account for histories of racial violence such as the lynching of Allen Brooks.

Remember, Black Dallas spent about nine months planning and discussing with the city before choosing to file an independent application in November 2019. He helped launch a subsidiary of the effort, called the Dallas County Justice Initiative.

The Historic Mark Project requires groups like Remembering Black Dallas to create a community engagement program in their cities to educate residents about racial violence and the historical trauma of the events. The goal is to continue the conversation, to continue to acknowledge and reflect on what happened.

Remember Black Dallas’ plans to host an essay program for local high school students to analyze the history of the event and how it resonates in the present.

The organization has already awarded five $5,000 scholarships to students who have written about the history of lynchings in Dallas, racial violence, segregation, and the civil rights movement.

Keaton plans to host a second scholarship program to raise awareness about Allen Brooks, but is concerned about a new state law designed to ban the teaching of “critical race theory,” an academic term for studying how racism affects American public policy. The law, signed by Governor Greg Abbott at the last legislative session, requires teachers to provide information about current events that must “take both sides into account.”

“I’m really concerned that because of the new law, critical race theory in our history cannot be talked about in schools,” Keaton says. “Now we’ll have to start looking elsewhere to bring the students together to do the project in order to get the article done and done.”

Keaton is not finished. He plans to build a sign for William Allen Taylor, a black man executed on September 12, 1884, in a Trinity Outlook. He was arrested and killed by an angry mob and two sheriffs while on his way to Waco. The memorial is scheduled for September 12, 2022, with a scholarship program starting in January of that year.

“We live in somewhat the same types of situations, more than 100 years later. I want to make sure that people understand how realistic that is and that it can happen to anyone today,” says Keaton.

More than 111 years after Brooks’ murder, black Dallas residents and their allies gather at the intersection of Maine and Acard to clear the land (and Dallas) of Brooks’ untimely death. Yoruba chants and chants erupted from the mouths of the white-clad ceremonial dancers. The city of Dallas of all generations came together not only to remember Brooks, but to remember the generational struggle against anti-black racism. 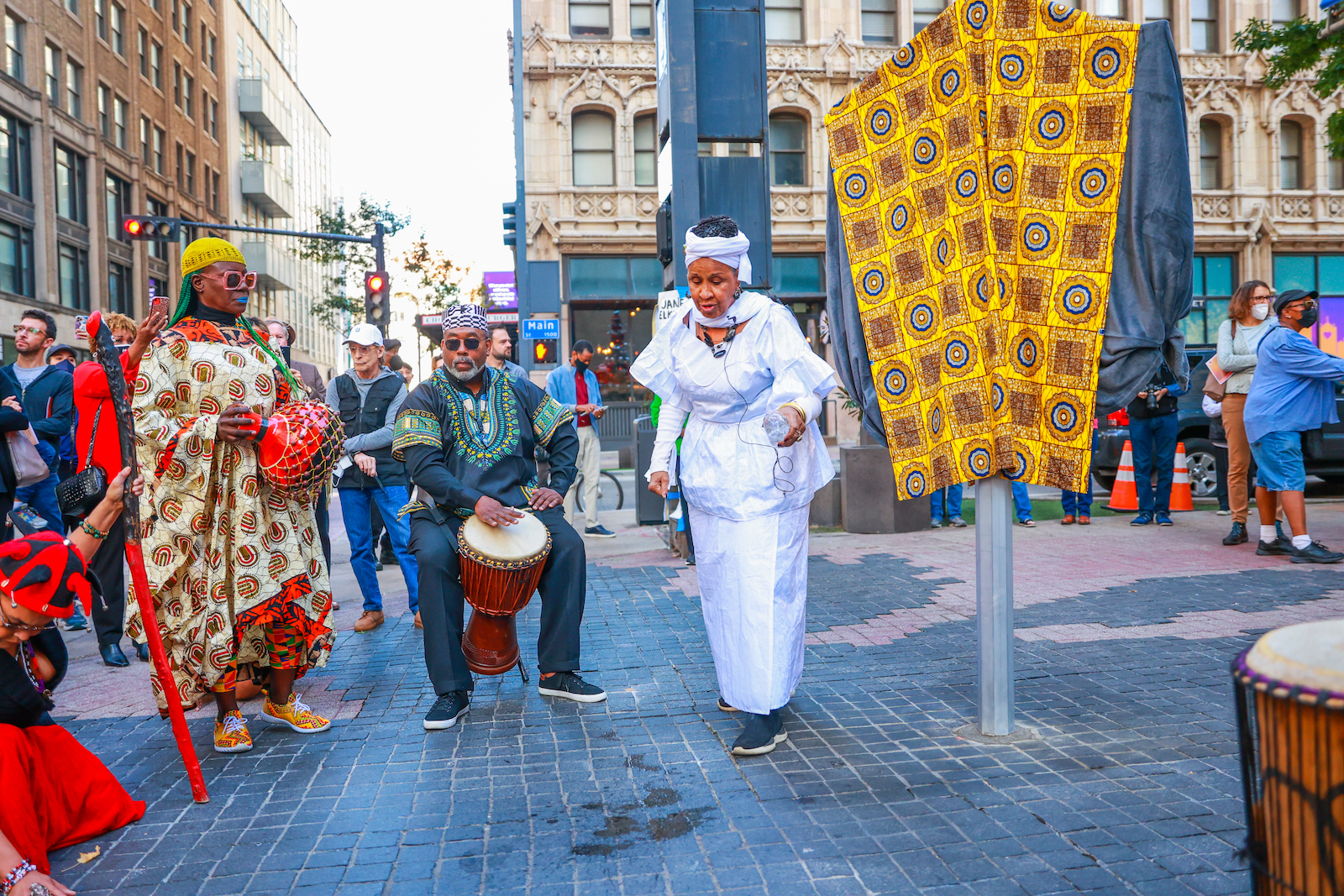 A sign now stands on Main and Akard Streets in downtown Dallas, acknowledging the summary execution of Allen Brooks in 1910. Here, attendees perform a libation ceremony, in which participants leave an offering to commemorate Brooks.

Once the intersection was cleaned up, Reverend Deborah Isaac Hobbs led the crowd in singing “Rise Up Every Sound and Sing,” the black national anthem. The last four lines of the song correspond to the party’s messages to remember Dallas’ black past in order to create a just and equitable future:

After the sign was revealed, the group walked to Old Red Court to perform the ceremony there, where Brooks was thrown from the second floor. Keaton joined speeches by District Judge Clay Jenkins, Commissioners John Wiley Price and J.J. Koch, and City Council Member Paul Ridley, who represents the area. By Saturday afternoon, the historic marker commemorating the life of Allen Brooks was standing in Maine and Acard.

Keaton unveiled the sign; Broadcaster and columnist Ed Gray read the introduction and organizer and activist Olinka Green read the back. Others bring more context.

Reverend Michael Waters, another speaker, founder and pastor of the African Methodist Episcopal Church, said, “I hurry in the day when the near-constant stream of black tragic death and the need for such memorials with it ceases.” “But today, I am grateful that we have taken the time to see and remember. And in our remembrances, I pray to recommit ourselves to eradicating the regimes that continue to crush black bodies on Earth. Mr. Brooks, may the Angels’ Travels sing to you for your comfort.”

There is still much work to be done and more atrocities to be remembered. On December 27, the Dallas County Justice Initiative turned its eyes to another memorial, this one to a man named Robin Johnson, who was executed summarily in 1874, nearly four decades before Allen Brooks.